Situated in the North-East region of Vietnam, Halong Bay is a bay in the Gulf of Tonkin comprised of regions of Halong City, the township of Cam Pha, and a part of the island district of Van Don. Halong Bay borders Cat Ba Island in the southwest, the East Sea in the east, and the mainland, creating a 120 km coastline Halong Bay is made up of 1,969 islands of various sizes, 989 of which have been given names. 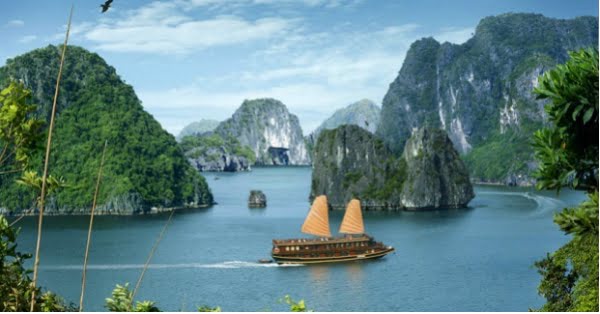 There are two kinds of islands, limestone and schist, which are concentrated in two main zones: the southeast (belonging to Bai Tu Long Bay), and the southwest (belonging to Halong Bay). This densely concentrated zone of stone islands, world famous for its spectacular scenery of grottoes and caves, forms the central zone of Halong Bay, which has been named a UNESCO World Heritage Site.

The bay itself has an area of 43,400 ha, consists of 775 islands, and forms a triangle with the island of Dau Go (Driftwood Grotto) to the west, the lake of Ba Ham (Three Shelter Lake) to the south, and the island of Cong Tay to the east.

Viewed from above, Halong Bay resembles a geographic work of art. While exploring the bay, you feel lost in a legendary world of stone islands. There is Man’s Head Island, which resembles a man standing and looking towards the mainland. Dragon Island looks like a dragon hovering above the turquoise water. La Vong Island resembles an old man fishing. There are also the islands of the Sail, the Pair of Roosters, and the Incense Burner, which all astonishingly resemble their namesakes. The forms of the islands change depending on the angle of the light and from where the islands are viewed. At the core of the islands, there are wonderful caves and grottoes, such as Thien Cung (Heavenly Residence Grotto), Dau Go (Driftwood Grotto), Sung Sot (Surprise Grotto), and Tam Cung (Three Palace Grotto).

Halong Bay has many links to the history of Vietnam. For example, there are such famous geographical sites as Van Don (site of an ancient commercial port), Poem Mountain (with engravings of many poems about emperors and other famous historical figures), and Bach Dang River (the location of two fierce naval battles fought against foreign aggressors).

It has been proven by scientists that Halong was one of the first cradles of human existence in the area at such archeological sites as Dong Mang, Xich Tho, Soi Nhu, and Thoi Gieng. It is also a region of highly concentrated biological diversity with many ecosystems of salt water-flooded forests, coral reefs, and tropical forests featuring thousands of species of animal and plant life.

With all this in mind, the 18th meeting of the Committee of the World Heritages of UNESCO (in Thailand on December 17th, 1994), officially recognized Halong Bay as a natural heritage site of worldwide importance.

Dau Go Grotto is found on Driftwood Island, formerly known as Canh Doc Island. The name Driftwood Grotto comes from the popular story of the resistance war against the Nguyen Mong aggressors. In a decisive battle, Tran Hung Dao was given an order to prepare many ironwood stakes to be planted on the riverbed of the Bach Dang River. The remaining wooden pieces were found in the grotto and, as a result, the grotto was given its present name. The entrance is reached via 90 steps up the island. The grotto is  divided into three main parts. In the first chamber, many forms can be seen in the rock, depending on the imagination of the observer. In the middle of the chamber, on the top of the pillar, there appears to be a monk draped in a long, dark cloak, with his right hand clasping a cane. Moving into the second chamber, visitors pass through a narrow “door”, naturally formed through erosion. The light here is mysterious, and new images appear in the stone. At the end of the grotto is a well of clear water surrounded by four ancient walls.

In this grotto, there remains an engraved stone stele singing the praises of Halong  Bay ordered by Emperor Khai Dinh when he came to visit the grotto in 1917. Dau Go is 40 minutes from Bai Chay. Admission is 15,000 VND per person, 5,000 VND for children under 15, and children under 6 are free.

Note: the admission here is for one tour of Dau Go cave, Thien Cung grotto and another. If visitors want to go on an additional tour (tour 2), it costs 15,000 VND extra. 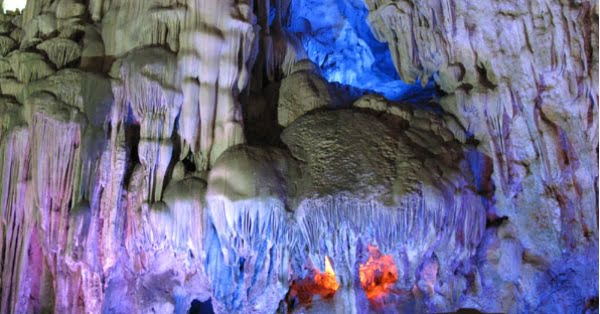 The Virgin Grotto is situated in the island range of Bo Hon, in the system comprised of the Surprise Grotto, Dong Tien Lake, and Luon Grotto. The grotto is 15 km south of Bai Chay Beach. For some fishermen, the Virgin Grotto is home, while for young lovers it is a popular romantic rendezvous site.

According to legend, there once was a beautiful fisherman’s daughter, whose family was so poor that they were in service of the rich administrator of the fishing zone, who forced the family to give him their daughter as a concubine. However, the fisherman’s

daughter already had a lover and refused to marry the administrator. The administrator got angry and exiled her to a wild island where she suffered from hunger and exhaustion. One frightful night she turned to stone. On this same night

her lover, knowing of her danger, rowed his boat in search of her. However, a  tempest destroyed his boat, and he floated to a nearby island. In a flash of lightening, he saw his lover in the distance, but his calls were driven away by the wind. In his final exhaustion, he also turned to stone (today’s Male Grotto).

When visiting the Virgin Grotto, you can still see the petrified girl with her long hair hanging down and eyes looking towards the mainland. Opposite the Virgin Grotto, the Male Grotto is still home to the lover whose his face is turned towards his mate. At times, his passionate calls and blows against the walls of the grotto can still be heard.

This recently discovered grotto is one of the most beautiful in Halong Bay. Thien Cung is situated on the southwest side of the bay, 4 km from the wharf outside of Halong City. It is located in a small range of islands that resemble a throne embracing two superb grottoes at its core. The way to Thien Cung is perilous, covered on both sides by thick forest.

According to legend, a beautiful young lady named May (cloud) caught the eye of the Dragon Prince and he fell in love with her. They were betrothed and got married in the very center of the grotto. All of the scenes of their wedding, which lasted for seven days and seven nights, have been seemingly fossilized in the grotto.

In the center, there are four large pillars supporting the “roof of heaven”. From the base to the top, many strange images seem to exist in the stone, including birds, fish, flowers and even scenes of human life. On the north wall of the grotto, a group of fairies seems to be singing and dancing in honor of the wedding. Under the immeasurably high roof, stalactites form a natural stone curtain. There is also the sound of a beating drum made by the wind blowing through the stone.

In the last chamber of the grotto, a natural gushing stream of water babbles throughout the year. Here there are three small ponds of clear water. One path meanders out of the grotto. 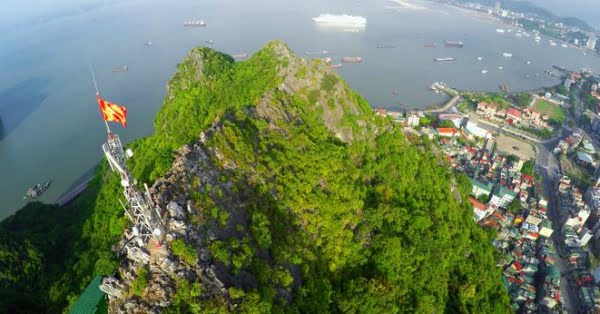 Bai Tho Mountain is 106 m high. It runs along the coast, half on land and half in the sea. Sailing in the bay, one or two hundred meters from the mountain, one can see a

In 1468, Emperor Le Thanh Tong, who was also a poet, made an inspection tour of the North-East region. He stopped at the foot of the mountain, and inspired by the magnificent beauty of his surroundings, he wrote a poem. Later, he had the poem engraved on the wall of the mountain. It is very interesting to

climb the mountain and enjoy the panoramic view of the bay. 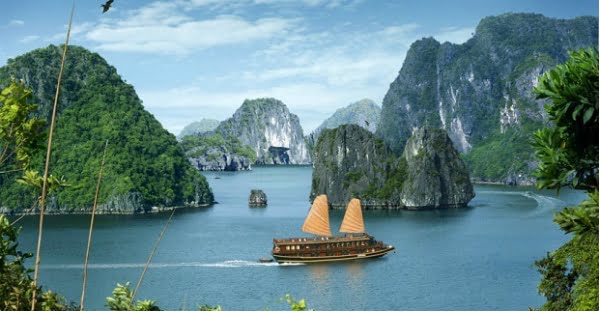 Situated 3 km west of Dao Go Islet, Tuan Chau Islet has an area of 300 ha. On the islet, there is a very simple bamboo house built by the inhabitants of Quang Ninh for Uncle Ho to rest after visiting Halong Bay. The house is now carefully preserved by the locals. 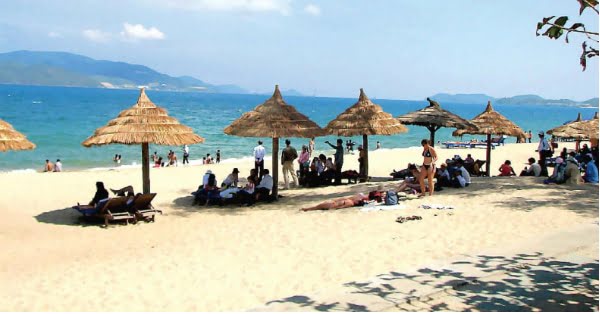 Bai Chay is a resort located along the coast of Halong Bay. This is a windward ocean resort which has a year round average temperature of 20oC (68oF).

Bai Chay is a low gently sloping range of hills that runs along the sea for more than 2 km. Blended in among the pine trees are large hotels and small villas with distinguished architectural styles. Traveling down the asphalt road along the coast, visitors see long white stretches of sand and green rows of Casuarina trees, tucked under which are small family-run restaurants. After swimming at the beach, tourists can enjoy cold drinks and cool off in the breeze that sweeps in from the sea. 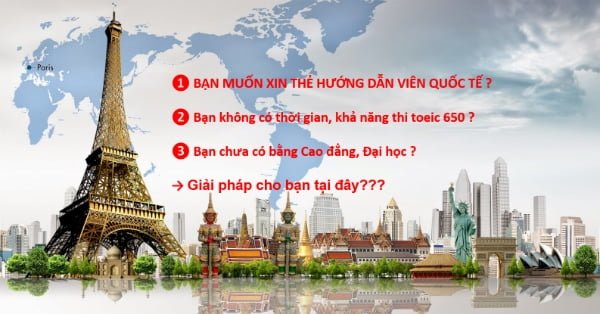